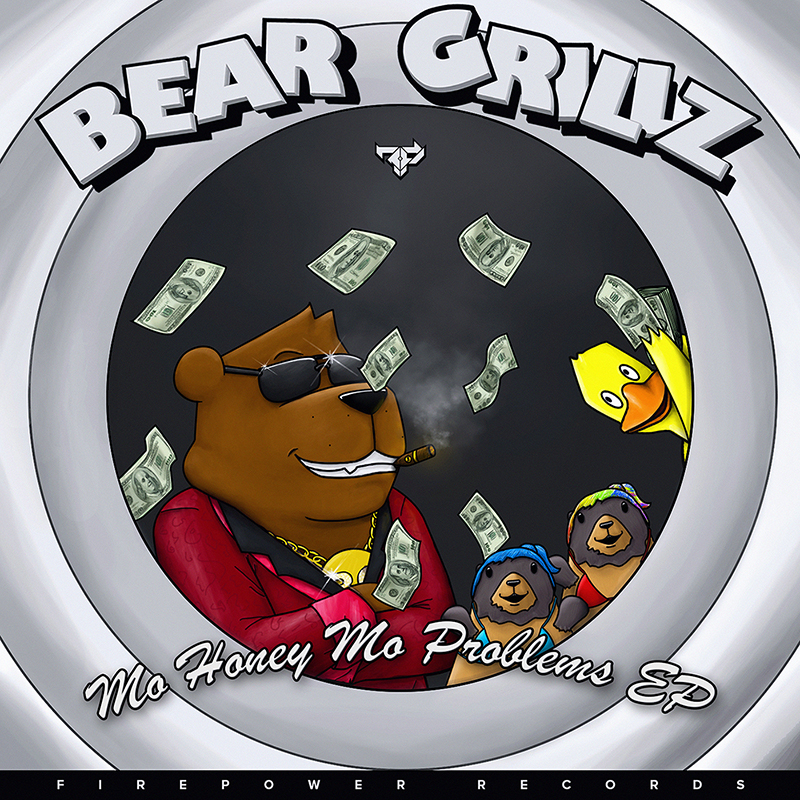 Los Angeles (March 31, 2016) Firepower Records will release Bear Grillz’ brand new EP Mo Honey Mo Problems, and we couldn’t be more thrilled to welcome the big beast back from hibernation. Well, not exactly hibernation—for the last 4 months, Bear Grillz has been on a massive bus tour around North America with Excision’s Paradox Tour. If you were lucky enough to witness the show, you probably left a changed person. And it wasn’t unusual to see the house packed just after doors because, as the tour marched along, it was clear that Bear Grillz’ set was its own showcase and not to be missed. Now, with the momentum generated from the tour, we expect Mo Honey Mo Problems to rocket to the top of the charts, just like every other EP he’s released with us.

“Fuck Bitches Get Honey”, the first track on the EP, sets up a common problem among those struggling to reconcile their celebrity status with a basic need for the bear necessities. It’s a particularly complex conundrum for Bear Grillz. The track goes large immediately, spotlighting the familiar buzzsaw synth and big dubstep beat structure fans have come to love. New to this EP, though, is a heightened emphasis on melody creation through the use of sweeping euphoric synth arrangements. By pre-empting the international big room sound and forging it together with sawtooth synths, the track transforms into a mind-altering face-melter. This technique is perfected in “Everyday”, which leans on chiller and funkier musical components. Bear Grillz isn’t a softy, though; it doesn’t matter how many hugs he gives to fans before and after his shows. He wants to rage and expects the same from his audiences. So despite the clever key progressions and melodic overtones, the track drops into headbang territory real quick.

It’s not a new move for Bear Grillz to tease out multiple dance music genres within his tracks. “Going Down (Under)” is both an homage to his love of all things Australian (we have it on good authority that more than a few Aussie DJ’s have attempted to smuggle Bear back to Sydney in their suitcases), and his love of dance floor mosh pits. “Going Down (Under)” has at its core a Hardstyle beat structure designed to incite heavy moshing during peak hour. But when the track drops back into a filthy lazer-infuzed Dubstep section, the only option is to promptly lose your mind.

Rounding out the EP is “Back On Top”, and it’s quintessential Bear Grillz. Returning to musical themes of past EPs, the track toggles between familiar synth arrangements and vocal samplings. It’ll make the BG purists smile, and it feels like getting a big furry musical bear hug. The biggest part of this track, though, is the drop. The buildup makes you ache with anticipation, and when the drop hits, it cleaves your sanity cleanly and completely away from your mind. Any follower of Bear Grillz knows how much work he puts into ensuring his drops are insane. This track is no exception.

The track listing for Mo Honey Mo Problems is:

For More info on Firepower Records: