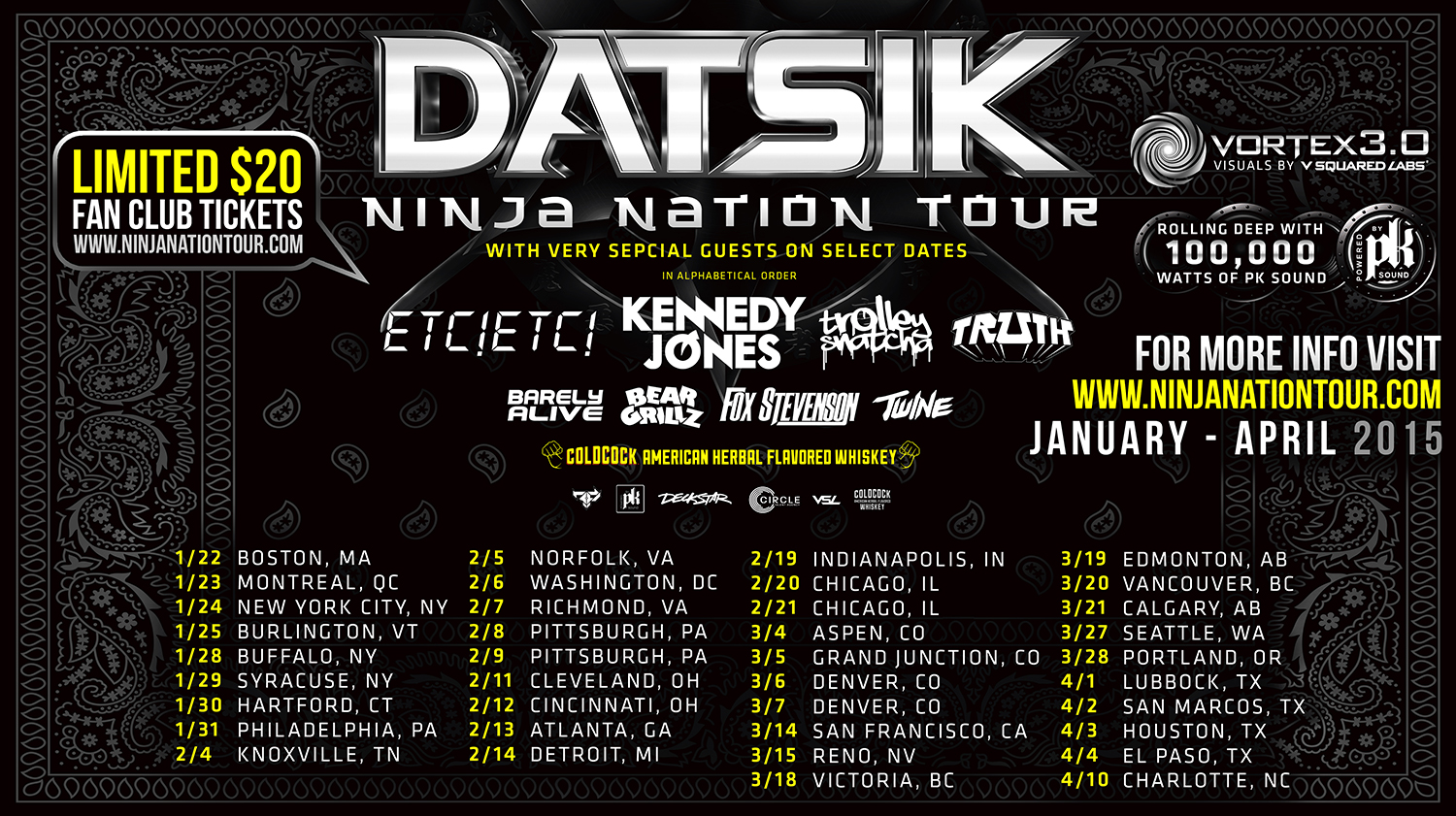 Tickets on sale now at www.ninjanationtour.com

DATSIK— the North American producer and purveyor of new bass hip-hop–has announced he’ll return to the road in 2015.

Kicking off January 22 in Boston, DATSIK’s ‘Ninja Nation Tour’ will hit over 50 cities across North America through the first quarter of the year. Leading up to the tour, his label Firepower Records is set to release his Down 4 My Ninjas EP on November 25. Tickets for DATSIK’s Ninja Nation Tour go on sale today (November 13) at www.ninjanationtour.com

Themed after his obsession with ninjas and all things martial arts, the Ninja Nation Tour is a call to arms for his fans across the continent—whom he calls his Ninja Squad–to experience DATSIK’s homage to hip-hop influence on American dubstep. He’ll highlight material from his new Down 4 My Ninjas EP plus other cool cuts from his Firepower arsenal and favorite tracks and bring along VORTEX 3.0–the third issue of his psychedelic stage set–which is getting special upgrades tied in with the ninja theme.

Fans are encouraged to join DATSIK’s Ninja Squad at datsikninjas.com where they can obtain a limited number of specially priced $20 tickets to the Ninja Nation Tour and win special prizes including an exclusive DATSIK sub pac, a package from Rockstar Energy and DATSIK merch, as well as be privy to special events around the shows.

“I am really excited to be going back on the road for what is undoubtedly going to be the biggest tour I have ever done. We are gonna be on the road for four months with some insane new talent as well as some names you’ve grown to love,” says DATSIK of the tour, also sponsored by Coldcock American Herbal Flavored Whiskey. “We will have the infamous PK sound system with us again and the new Vortex 3.0 at most of the shows. This tour is gonna be on a whole new level of sick and I can’t wait!”

Boasting collaborations on his new EP with hip-hop legends KRS-One and DJ Paul from the GRAMMY-Award winning rap collective Three 6 Mafia, DATSIK shows that sometimes moving forward means cultivating a deep respect for those who’ve paved the path ahead of you. Down 4 My Ninjas is a representation of that vision. From Mayor Apeshit’s filthy lyrical swordplay in “Katana” to DJ Paul’s Dirty South “Zero Fucks” attitude in “Get Smashed,” the tracks could have possibly been featured in the rap sections in record stores of the past. Fast forward 20 years and the lines are blurred. What DATSIK has done is given a classic genre new potential energy to burn. All it needed was his signature bass forward approach…a formula for future hip-hop.