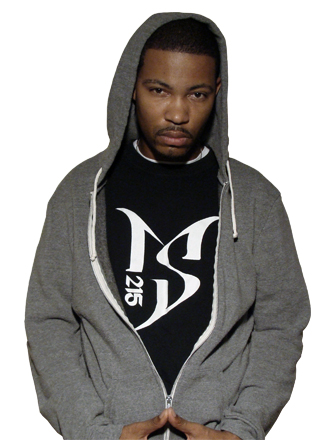 In the beginning… Armanni Reign grew up rapping everywhere from elementary lunch room tables to high school hallways to college house parties as a hobby before realizing the worth of his gift. Back then, you would prove your worth by progressing from cyphas to battles which is what he did to make a name for himself. He started in small competitions and eventually worked his way on to radio spots. After spending three continuous months as Philly 103.9FM’s ‘Cypha’ champion, MC Armanni decided he needed a change. In the year 2000, he found that in Drum and Bass.

By 2003, MC Armanni Reign had made quite a name for himself hosting and performing with everyone from Kenny Ken to DJ Craze and was even nominated that year for “Best Breakthrough MC” at the Knowledge Drum and Bass Awards. In 2004, he started touring the states with legendary producer, graﬃti artist and DnB representative DJ Goldie. He is now currently touring heavily with one of the proliﬁc DJs of our time, Andy C and is undoubtedly considered a veteran in the US Drum and Bass circuit amongst the most respected forces domestic and international.

Considering himself a hybrid, MC Armanni Reign has never been the one to settle into just one genre of music. As a part of the powerful Hip Hop group formally known as Mental Sharp along with Sharpness MC, the duo has released ﬁve mixtapes: On n Poppin’, Above the Beats Below the Bass Negative 1, 2 & 3 and Epiphany while dropping Hip Hop/DnB anthems like ‘P.H.I.L.L.Y. VIP’ (GASM) and ‘Hit Em’ Hard’ (TekDbz). He is now also the vocal presence in a collective that includes New Zealand’s super-producers, The Upbeats known as Society of Numbers.

MC Armanni Reign is now becoming the go to voice regardless of genre creating charting smashers like Zomboy’s “Outbreak” to Barely Alive’s “HACKERS”, Riot’s “LSAR”, Virtual Riot’s ‘Running from the Cops” to Hybrid Trap bangers like Mark Instinct’s “The Show”, “Suicide Pill”, “Pour It Out” and even to 12th Planet and The Trickaz’s chart killer “Bless That”. From smoother vibes like Kastle’s “Timeless” to Mayhem and Logam’s DnB roller “We Will”, he has proven versatility is an asset. With DnB releases currently on RAM, Gasm, Freak, Intasound, Westbay Music Group, TekDbz accompanied by Dubstep/EDM Trap releases on Play Me, Never Say Die, Rotton, Uplink Audio, Buygore and Firepower with even more collaborations in the pocket yet to be released… Armanni shows no sign of slowing down.

There are no releases available from Armanni Reign at this time.